June 05, 2016
Neco, Neco, Neco. The Latin chant hums through my head, blocks any thoughts, any emotions, any memories. The ladle feels heavy in my hands, why do I have that again? I lift it to my head. The handle is covered in apple juice. My hand is covered in apple juice. I scream and drop the ladle. It thermoses until it hits the floor. Bits of liquid splatter everywhere, covering my feet, my legs, my face. I can taste something metallic on my tongue. The chanting grows louder and louder, closer and closer. A scalpel steps from the darkness, its body teetering left and right as it moans. The ladle is stuck in its chest. It’s leaking apple juice. No, it’s leaking blood. I killed that man.

I am a computer. I’ve been programmed to do only one thing. Kill or be killed. There are a thousand of ways to achieve this goal, but in the end, the objective is the same. My programmer and caretaker Scythe calls me Septem or Sept for short. I’m the seventh of his creations, the newest in his series of killing machines. As far as I know, all the others are dead. Scythe is a freelance assassin. I am his weapon.
“Morning,” Scythe says as I walk into the kitchen. He doesn't lift his eyes from the newspaper he’s reading. Scythe is old, somewhere in his late 60’s. Even so he’s fit enough to take down a soldier with a yawn, probably fit enough to take down me. He sits at the kitchen table, his salt and pepper hair sleeked back. Around his eyes are smiling wrinkles, though I have never seen him smile that far. The finger on his left hand has an indent where a ring should be. I eye him as I take out a box of cereal. He never mentions it but I suspect Scythe likes to cosplay. His outfits always show hints about our next mission. For example today, he wears a freshly pressed suit, like he’s going to meet the President. He begins speaking as soon as I sit across from him.
“Today, we are to take out Senator Haley. He’ll be having a private meeting at the Ritz with Senator Blenheim and our clients don't want that. You’ll snipe him from the building next door, I’ll ensure that we don’t have any trouble. Understood?” he asks.
I nod as I pour my cereal. A senator, huh? I was close. With nothing more to say, Scythe folds his newspaper and leaves. I sit alone staring at a concrete wall. I slather honey all over my cereal but my tongue can barely taste any of it. I try to ignore the distant hum of voices in my head, singing neco, neco, neco.

Night, city, people. I approach the edge of the rooftop. I'm 700ft above the ground but I look down without fear of the height. Below me people scurry across the streets like ants, not caring, not knowing anything beyond their own little world. A small mic crackles in my ear and I hear Scythe’s fuzzy voice. "Senator is entering the meeting. Get ready." I open the case next to me. Inside is a sniper rifle. I set up the gun and test the air. I calculate air resistance, height, and gravity and adjust myself. I lie on my stomach and look through the spyglass. A group of men steps into the conference room on the 64th floor of the building across from me. Some are talking. Others settle down into seats and pull out laptops. I focus on one man in particular, a forty-year-old with blond hair and blue eyes walking in, talking to a woman. She’s tall, almost as tall as the man. Her brown hair is a mess of tight curls. In one hand she carries a folder and computer while the other fiddles with a pencil. She is wearing lipstick, red like cherries. The man seems to be watching her lips, watching them meet and then separate, then meet again. His hand trembles, his foot taps. He wants something. The women stops talking and from my scope I see her hand brush against his leg. The man notices the gesture too. His blue eyes lock with hers. Are they lovers? It doesn’t matter. His lover, his wife, his secretary, I pull the trigger. For a moment nothing happens but then I watch as a red dot appears on the man’s forehead. His smile slacks. His eyes bug out. He collapses and the room falls silent. I move the quickest in the moment when everything stops. I disassemble the sniper and snap close the case. I check for evidence I might have left behind, before hurrying down the stairs. I don’t look back at the carnage I’ve made. I don’t need to. There is a vent, three flights down, where I throw in my case and pull out a duffle bag filled with clothes. There on the steps I change out of my black coat and pants and into the suit Scythe has prepared for me. I don’t have time to comb my hair, it only takes a few minutes for someone to call the police, so I throw everything back into the vent and take the emergency exit to one of the hotel floors. No one is present. I walk over to elevator and press the button for down.


By the time the police have barricaded the block, I’m already in Scythe’s car driving away. We say nothing, but I can tell Scythe is happy. As we drive, he turns on Bach, humming and tapping his finger to the violins. I watch the streets rush by us like a wave. I can’t hear the Bach, I can’t even hear the sirens, all I hear is neco, neco, neco growing louder and louder with each mile.
Short Story

Popular posts from this blog

I Won A Contest!

Hey All!  I won 3rd place in a flash fiction contest! You can read the winning story HERE  (just scroll down till you see my face.) An interview should be coming out shortly!
Read more 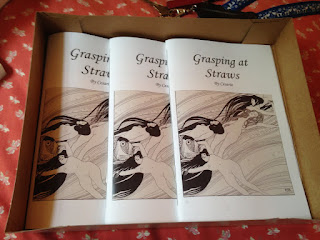 Not so much a story (that'll come later on this week) but I made my first chapbook! XD I won't indulge you into the history of Chapbooks, (mostly because I know so little about the history) but to put it simply I collected a few pieces I made and gathered them in a pamphlet style booklet.   I printed 20 copies, but after handing most of them to my writing class, three to my uber driver and 1 to my housekeeper, I'm left three. :( Needless to say, I'm super proud of this accompliment. It's so satisfying to see my work in a physical form.   I was thinking of posting a digital spread of my piece, for people to read. But I'm curious, would anyone be interested?
Read more

May 10, 2017
“The temperature dropped on Friday and ever since then I’ve been cold. But not the skin deep kind of cold, you know? It’s like something deep inside me froze and I’ve been breathing frost ever since.” Charlotte didn’t look at me as she said this, even as she handed me the next cup to dry. “By Saturday I had to pull out my blankets and jacket just to keep myself from freezing over.” Her hands stopped moving in the sink. Her eyes staring out the window seem to take a forlorn look as though she was watching some bittersweet memory in the sky. I had been staying over at her place for the past two nights. Ever since she came back from her accident. Her family couldn’t afford to take her in but they also couldn’t afford to send her to the ER again if something happened. So they hired me as a stay at home nurse. Charlotte had been so sweet, so open to me. I wondered how long she had been living alone. “I found his sweater,” she said. Her words were soft, private. I asked her to repeat th
Read more

Isabella Kestermann is writer and editor based in Los Angeles. She graduated from Emerson College with a B.A. in Creative Writing. Currently she works as a freelance editor and a T.A. for The Frankenstein Editing Lab run by Josh Grapes.